Momma Cuisine
Chicago/Aurora, IL, United States
I am just like so many busy moms out there. I want to create great meals for me and my family where the food brings us together at the end of a long and hectic day. I want to empower moms to feel like they are able to make Great Everyday Meals by using simple, accessible, and inexpensive ingredients and basic cooking techniques. It’s more about family and less about slaving away in the kitchen cooking. I have been a restaurant industry professional for about 10 years and have a great passion for cooking. I will share tips, recipes and techniques that I have learned to arm everyday cooks with the foundation to simple yet great tasting cooking! Johanna M. Cook

"More is the leading voice of today’s sophisticated, affluent and accomplished woman, who is enjoying the richest years of her life, sharing news and advice on beauty, fashion, health, career, travel, money and relationships from her distinct perspective." -More Magazine 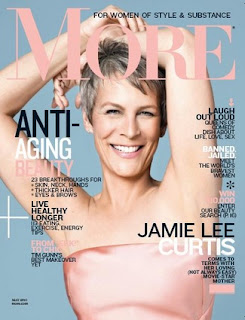 This past Monday, I was invited by a fellow blogger to attend MORE Magazine's Reinvention Convention held in Navy Pier in Chicago, Illinois, as press to cover the event in my blog. Before this convention, I did not know much about the magazine besides the seldom glance at the cover in the local grocery store's magazine isle. Also, let me preface this article by saying that I do not by any means perceive myself as "press", although I have had dreams of becoming a magazine writer ever since my failed attempt at finishing college with a magazine journalism degree from Columbia College (Chicago). So, it was to my very pleasant surprise to have been invited under such circumstances.
Since MORE Magazine's target audience, as stated in the first paragraph, was for affluent and accomplished women over 40 years old, I had no idea what to expect from the convention being that I am a 29 year old, young mother, with 3 kids under the age of 10, still trying to find my place in my chosen career and definitely not (yet) affluent by our society's standards. However sophisticated, I did not feel that I would fit in. So, I was very interested about what I was going to take away from this conference.

Upon entering the event, I was greeted with a check-in table with a line of very well dressed ladies, with ear pieces and great big smiles on their faces. I was told to check in at the press area where I received a press badge. Let me tell you that at that moment, I suddenly felt all the old dreams I once had of becoming a magazine writer rush back in my veins. Even though I knew that I did not write for a publication, and all I had was this little known blog about my love for food and family, I did not care. It felt awesome! So, as I walked with my blogger friend into the grand ballroom, I began to feel truly excited about the conference.

The emcee for the evening was Lee Woodruff, a funny and witty co-author of the best-selling In an Instant, and an ABC's Good Morning America contributor. You might know of her best from the inspiring story about her husband, Bob Woodruff, an ABC co-anchor of World News Tonight, who while reporting on U.S. and Iraqi security forces, was seriously injured by a roadside bomb that struck his vehicle near Taji, Iraq. She spoke about her life in those difficult times and how she stayed strong for her husband, children and herself. It was a great introduction of what was to come.

Keynote speakers included Dara Torres, a 12 time swimming Olympic medalist, who at 41 years old,  faced a comeback in the 2008 Olympics and won 3 silver medals despite the media's criticism of her older age. She spoke about her memoir, Age is Just a Number: Achieve Your Dreams at Any Stage In Your Life.  Here I was, feeling very insecure about my youth and inexperience, surrounded by very well put together (older) women, with more money, more accomplishments and carrying purses worth as much as my mortgage payment when I really started to listen to Dara's message. She achieved this great goal of being in the Olympics at the age of 41. Not only did she compete in the Olympics, but received 3 silver medals! Her whole life, she devoted herself to her passion and talent. And at every stage in her life, she accomplished great things. So, no matter what age you are, young, old and in between, your dreams are at different stages also. The point is to always follow your heart and use your talents to achieve the goals you have set for yourself, and once in a while you'll be surprised at how you can exceed even your own expectations and blow everyone away.

The second keynote speaker was Dana Delaney who currently appears as Katherine Mayfair on Desperate Housewives. She is a single, talented actress who spoke very openly about sexuality and her craft. She was a nice addition to the group since she brought a vibrant attitude and spoke about how happy and satisfied she is to be single at her age. It was wise for More to invite her as a speaker as there are many women who are just like Dana, who are happily single or divorced and are satisfied in their careers. This was very refreshing to listen to and all the women particularly enjoyed her question and answer with Lee Woodruff as she spoke about her experiences in tantric breathing.

The closing keynote speaker for the day was none other than the very inspiring, Ambassador Nancy G. Brinker, founding chair of Susan G. Komen for the Cure. She was recently appointed by the World Heath Organization to Goodwill Ambassador for Cancer Control. It was so awesome to hear her speak about the "power of one". Her idea about the power of one is simple. Every person, in his/her own community, family, workplace and circle of friends, has the power to make a change for any cause. Her commitment to end breast cancer to her dying sister, "Suzie", as she lovingly called her, brought her to do such great things to help find the cure for this disease. And everyone has the power to do great things if they choose to do so.

The convention also broke out into smaller sessions with speakers focusing on finance, social media, career reinvention, health, fitness, sex and beauty. It was a well rounded group of fabulous women who were experts in their field and who brought real knowledge and great advice for women of all ages. I was particularly excited to get the chance to listen to, meet and get a book signed by Jean Chatzky, an award-winning journalist, motivational speaker, and financial editor for NBC'S Today, contributing editor to More and a columnist for The New York Daily News. I always enjoyed watching her on Today on NBC and knew best from her financial advice.
At the end of the convention, I felt so inspired by these "older" women. So many times in my personal life, I have sort of envied the confidence and experience of these women. They even look better than I do! What I learned from a day spent at the More Magazine's Reinvention Convention was that all this does come with age and I cannot rush my own process. My own life's journey will take me into great successes and trials. As long as I follow my heart, my passion, my knowledge and continue to learn, I will become even more confident, more successful, and more passionate as the years come.
Posted by Momma Cuisine at 6:17 PM

You can also find Momma Cuisine on FOOD BUZZ